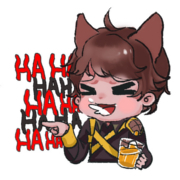 Twin Spirit Detectives or ShuangSheng LingTan is a donghua animated by G C May from 2016. Going into this series, my expectations were perhaps a little too high. Having the same director and animation team as both The King's Avatar and Mo Dao Zu Shi I was already sure that I would find something to like about this one and to it's credit I certainly did. There's an air of familiarity to this show that seems to call out to my heart directly. No... not them. Don't get me wrong, I love me some sexy white haired anime boys. I love it even more when they're duel wielding inverted monochromatic handguns. Hell, I even respect the idea of dracula rocking that. No it was my true love calling out to me from this show. My girl guo guo from The King's Avatar! Dressed up as a police-woman in booty shorts! You know how much I love that fantasy! And can we please just appreciate for one second the very existence of a studio as incredible as B C May animating some fanservice! Take a moment to appreciate that image again! They didn't just give us a butt shot, that's pretty much full on nudity you just have to use your imagination to erase that skin tight clothing! -- Wait... it was just a joke it's just a Peach!

Twin Spirit Detectives is a show about two twins... who are detectives... who look into supernatural mysteries... mysteries of the spirit you could say. So it is nothing, if not aptly named. XiaoTu and XiaoHu are two very different but equally good looking men who make it their job to reveal perceived supernatural occurences for the frauds they usually are. The story rushes forward at an incredible pace and within the 20, 14 minute long episodes, leads them into a large mystery that challenges their beliefs when it comes to the supernatural  and indeed their very understanding of the world around them.

To be honest this show was a difficult one for me to finish the whole way through. Not because it's THAT bad or there's something offensively wrong with it, I tend to enjoy a good old-fashioned train wreck like that. Rather it's how close this show came to being a masterpiece that causes me pain. As you can see, even with my terrible video editing software, the animation on this series was quite ahead of it's time compared to other donghua. The quality even holds  up better than many of the animations released around the world today. The soundtrack was fantastic with some absolutely stunning moments of sound direction, in particular during the horror centered scenes. When it comes down to it the problem with this show all boils down to the dead, teleporting, telekinetic baby... Did I lose you there? I hope I did because that was the intention.

You see the problem with this show lies within the fact that the storyline and pacing are all over the place. I don't generally include spoilers this early into a review but just to pre-warn you I am about to use an example from the first 6 episodes or so just to give you a feel of some of the shocking twists that could have easilly been a big arc turning point which are instead glanced over to rush forward through more plot. It should come as no surprise to you by the time it's revealed, but very early on it becomes apparent that XiaoHu, the more mature of the brothers, is in fact a spirit who can only be seen by XiaoTu. Haha, see that twin spirit detectives title just became even more literal, huh? Mind you I don't feel any remorse of spilling that can of beans since both the opening and the ending have very clear references to the fact that he's dead and for some reason they chose to still play the opening and ending before it becomes clear in the show. That's... where things only get weirder. Within the first few episodes of this show we discover XiaoHu has passed on and very rightly we have the show call into question whether XiaoTu is simply imagining his brother's existence beside him. Then we're quickly told that XiaoHu never existed which manages to shock our main characters' world for all of about 5 minutes of screen time, after which point he realizes "duh, of course he existed. There were many people other than me that knew him." Including the afforementioned Bing-jie who was engaged to him.

The problem with these story twists isn't their content of course. A character questioning their sanity after the loss of a loved one can be a very powerful plot point. Even moreso in this kind of series which has the added intrigue that maybe his brother really is a ghost that is bound to his twin. The problem comes from the fact that in this animation plot points like this are dropped into the mix constantly and then shoved aside with very little actual effect onto the main plot or characters. I imagine that some sort of production issues may have had a hand to play in the pacing, as, much like another broken almost-masterpiece Angel Beats the story starts off very slow and intriguing. Director Xiong Ke's masterful tension building is ever present within the first 4 episodes which mainly consist of the twins investigating a single incident involving a girl who is seemingly haunted by a spirit. After the fourth episode, however, things take a nose dive when it comes to series composition and pacing. Although there are still constantly brilliant moments here and there, for the most part it becomes very easy to simply zone out for a few minutes during an episode and discover most of what you thought was going on has been flipped on its head once again.

I would very much like to go into the innumerable inconcistincies which pile up by the end of this single season animation but for the sake of avoiding this video simply turning into a spoiler filled rant, just take my word for it that there are a ton. Thus far I've mainly discussed the storyline and only briefly mentioned the true selling points of the series: the animation and soundtrack. To start off let's dive into the animation which has the same rather unique style that G C May have for the most part conitnued using for their net animations. While the  action scenes aren't nearly as fluid or well choreographed as The King's Avatar and they've yet to begin using the 3D animation techniques that make each scene in Mo Dao Zu Shi feel so alive the artwork within this show was genuinely impressive. It presents itself more similarly to Japanese animation than many other donghua do, with a lack of emphasis on blurring effects or highly contrasted colour pallettes which gives it a more familiar feel to the non-domestic audience. While the story seemed to be very rushed to reach a fitting breaking point at the 20 episode mark the animation itself went strong throughout the series from beginning to end.

Likewise the soundtrack and sound direction were fantastic thoughout the series. The soundtrack tends to simply rely on quiet tone setting pieces for most of the dialogue heavy scenes, yet switches it up with some powerful orchestrated songs that favour piano and string instruments in the more emotional scenes of the show. The sound direction becomes really standout during the darker more horror filled scenes which make fantastic use of long drawn out drones to build suspense punctuated with intense sound effects and orchestrated crescendos once the tension reaches a tipping point. The one let down of the sound direction in this series seems to be some of the voice work within it. While none of it seems outlandishly bad, possibly due to the rushed nature of the plot and pacing there are very few moments where any voice actor really surprised me with their range or acting. As I said that doesn't mean everyone was bad in this in fact the twins were handled very well by their respective voice actors but the only other characters I really believed when it came to  their acting were Yang Tianshu who had to deal with a lot more craziness than some of the other characters and Professor Bi An who really sells that he is in fact crazy.

The question at this point becomes whether or not I would reccomend this donghua to people in the future and the answer to that would be probably not. I see this donghua in much the same way that I view many of the anime that get made in Japan. It seems that something went wrong in the creation process at some point that made this show's plot become very inconsistent and out of whack. Having read the first 10 chapters of the manhua I can see that there are small parts that weren't included in the show that do add to the fulfillment of the story. Thus this animation becomes more a sort of advetisement to me. First an advertisement for the source manhua if you really got into parts of the story, but wish it was more in depth and continued beyond the animation. Second as an advertisement for the animation studio G C May themselves. With the incredible moments that shine out in this show it's clear that the studio had some major talent within and it's nice to see one of the more awkward stepping stones on their way to greatness.

With that said though I think you should understand why this was a painful viewing for me. I came into this series with expectations that were too high but genuinely enjoyed the first few episodes regardless. It was only as the pacing sped up and inconstincies piled up that I then began to wonder why I even kept watching to the end. This is a flawed show for sure, but had they taken the time to slow it down and really focus on the characters and fleshing them out instead of simply rushing through the plot it could have been an incredible production. But that's just my thoughts on Twin Spirit Detectives or ShuangSheng LingTan so do let me know your own thoughts in the comments section below if you have already checked this one out. Otherwise thank you for watching this video and I hope you stick around for more reviews and analysis on the amazing world that is Chinese animation. I will see you guys next time.